The Mobile Majority is excited to announce that it has been awarded the title of Fastest Growing Technology Company in Los Angeles and second fastest growing company overall by the LA Business Journal.

“In an increasingly competitive LA tech scene, being regarded as the fastest growing technology company in the city is a huge accomplishment and is something we’re very proud of,” said Rob Emrich, CEO of the company.

Based in the growing and boisterous tech hub of Santa Monica, appropriately regarded as Silicon Beach, the award comes at the perfect time for the rapidly expanding ad tech startup as it begins to flex its influence in the advertising market. The company is led by founder and serial entrepreneur Rob Emrich. The Mobile Majority continues to experience rapid growth by focusing its resources on building solutions to the industry’s gravest problems.

How Fast Is Fast?

Based on the LA Business Journal’s formula for the award, The Mobile Majority grew 4,573% over a three year period.

Since 2013, the company has expanded from 12 employees to 65, over half of which are engineers or product-based. During the same period, the company has upgraded their office multiple times to facilitate a fast-growing team and is currently exploring its options at other larger spaces around LA.

The Mobile Majority’s growth has been grounded by its overarching mission to make advertising work for everyone in mobile: agencies, publishers, advertisers, and consumers.

All of this traction alludes to even bigger things to come.

“We are a team of innovators and entrepreneurs. We solve problems by building new things, and if building them isn’t the best solution,” added Emrich, “we find other ways.”

For more information about The Mobile Majority and its solutions, reach out directly here:

The Mobile Majority is an advertising solution that leverages a vertically integrated technology stack built atop a sophisticated data infrastructure to serve the most efficient, effective, and targeted advertising in the world. 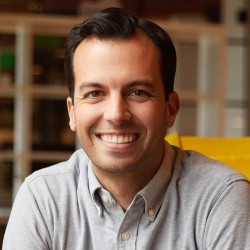 Matthew Russo
CMO / COO at Gimbal
Matt is an experienced marketer and business operator with a propensity to help brands use digital systems effectively. An entrepreneur at heart, Matt co-founded three companies in the digital marketing space prior to joining Gimbal. Most recently, he honed his skills through extensive agency experience where he worked with well over 100 national brands, local businesses, schools, non-profit journalism groups, and start-ups to grow and integrate their digital footprint. Today, he leads Marketing & Operations for Gimbal and educates brands about the complex world of location-based marketing and advertising.